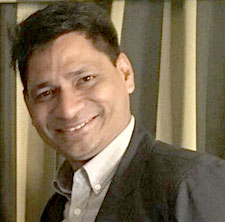 Ramesh Sharma was born in August 1972 in Uttrakhand and brought up in Delhi. He studied the Japanese Language and passed 3 years diploma in 1993. Topped high score in the institute. Graduated in Delhi. He has been very passionate about travel business right from his childhood days, which ultimately led to establishment of Sakura, a leading travel company in the country.Started traveling to Japan by own efforts for the growth of his living and travel business.

Ramesh has lived in Japan and established the trust among Japanese. As Managing Director of Sakura Tours Pvt Ltd (Formally) and presently advisor of Sakura Holidays , Ramesh Sharma has travelled extensively to places of tourist concern all over India, especially South Indian sector more than 100 times with prominent people of Japan. Year 1996 to 2000, Sakura got the best name in South India’s Tour & travel trade, especially handling large numbers of Sai Baba Tours and spiritual tours from Japan.

Ramesh Sharma has taken many political assignments between Japan and India.. Worked on assignment basis for Japanese Embassy, JETRO, Governor of Kanagawa prefecture, Indian state government including different chambers of commerce. Taken assignments for Japanese News Agency/Media House and magazines. Handled Japanese ( Movie talents/Stars ) actors and actresses to India Coordinated in Katsura Yumi bridal fashion show in Delhi, India He has given lectures to Japanese youngsters in schools and corporate houses on Indian culture , differences and similarities between Indian and Japanese culture, set the mind of working culture between two countries citizens . Voluntarily arranged cultural exchange events in India and Japan . Ramesh Sharma has been working to create the bridge between India & Japan for Cultural Exchange , tourism , business and to develop strong relationships between both the countries and their people.